Lymfactin® is based on the scientific discovery of VEGF-C, the natural human protein necessary for the growth of new lymphatic vessels. Lymfactin® is a gene therapy, which delivers the human gene coding for VEGF-C and thereby promotes the formation of new lymphatic vessels. Lymfactin® is administered locally at the site with injuries in the lymphatic system with the aim of repairing those injuries. In disease models, this local VEGF-C expression, which lasts for about two weeks, has resulted in the formation of new lymphatic vessels. This may eventually normalize the lymphatic flow and thereby stop the accumulation of the lymph in the patient’s tissue. If Lymfactin® works in human patients as well as it has worked in disease models, it can lead to a significant breakthrough in the treatment of secondary lymphedema. VEGF-C was discovered by Professor Kari Alitalo and his research group at the University of Helsinki. 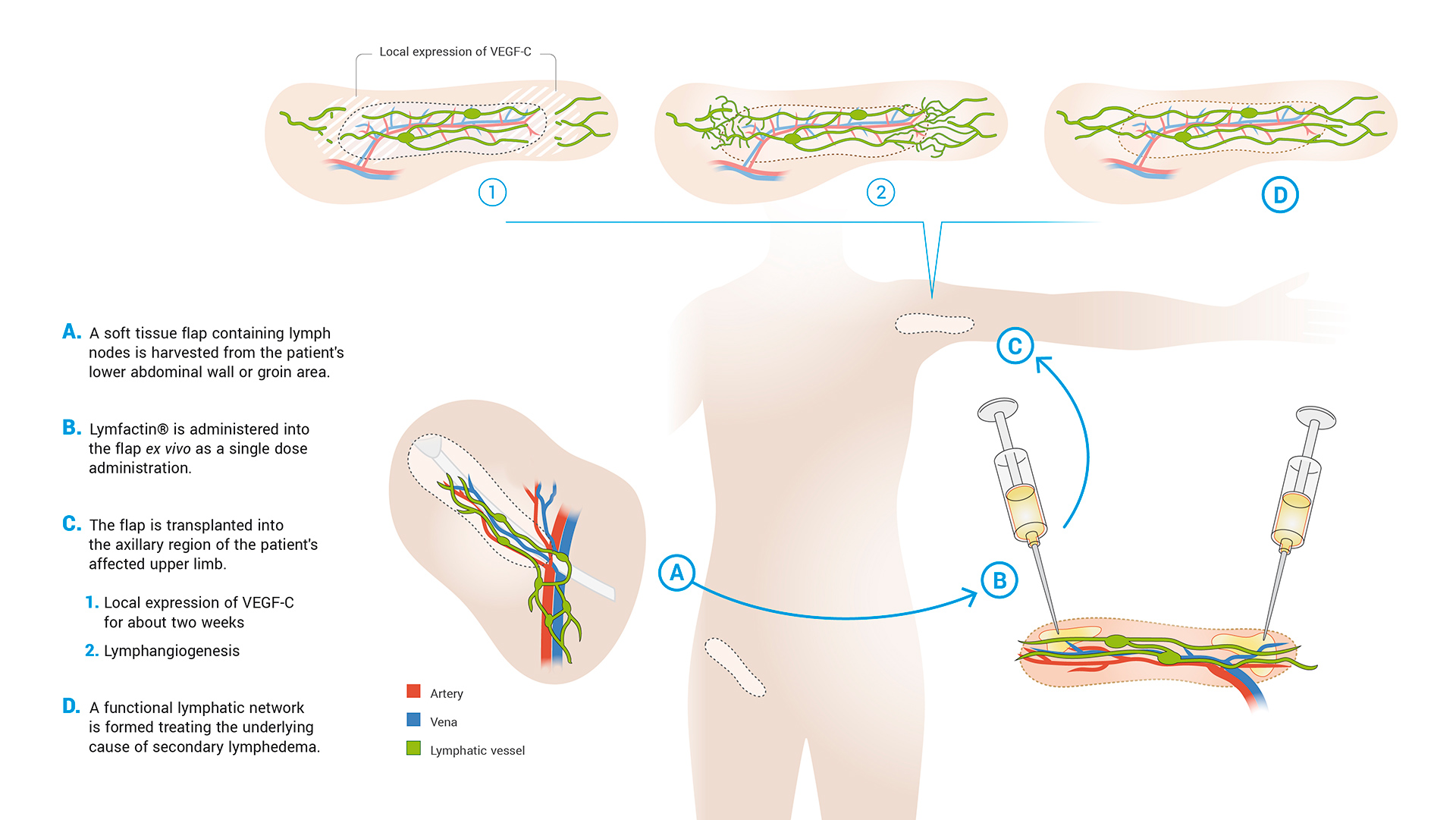 The ongoing Phase 2 clinical study is a multi-center, randomized, double-blind, placebo-controlled study. The study is planned to enroll about 40 patients in Finland and Sweden at five university hospitals in Uppsala, Stockholm, Helsinki, Tampere, and Turku. The Phase 2 study will assess the efficacy, safety, and tolerability of Lymfactin®. Half of the patients will receive one dose of Lymfactin® and half will receive placebo in combination with the lymph node transplantation surgery. The efficacy endpoints include the volume measurement of the affected vs. non-affected limb prior and after the treatment, lymphoscintigraphy prior vs. after the treatment for assessing the functionality of the lymphatic system, and the assessment of quality-of-life. More information about the ongoing clinical study is found at www.lymfactin.eu.

The Phase 1 clinical study recruited 15 patients from which the first three patients received a lower and the last 12 patients a higher dose of Lymfactin®. Both doses were safe and well tolerated based on the one-year follow-up. The higher dose was selected for the Phase 2 clinical study. The Phase 1 study continues with a long-term follow-up on all patients. In the Phase 1 study, there was no control group and, thus, no conclusions of the efficacy of the Lymfactin® treatment can be made based on the Phase 1 data.

Secondary lymphedema is caused by local injuries of the lymphatic system, which can manifest as a result of cancer treatments such as surgery and radiotherapy. The injuries of the lymphatic system may disrupt the normal flow of lymph, which will then start to accumulate in tissue, for instance in a limb. This results in chronic, progressive swelling.

Secondary lymphedema is a painful, deforming disease that often has a significant impact on the quality of life of the patients. Symptoms of secondary lymphedema include progressive swelling of the affected limb, pain, decreased mobility, and increased forming of connective tissue. Many patients also suffer from repeated infections of the affected tissue. Patients are often ashamed of their deformed appearance and may fail to seek appropriate treatment.

According to the global patient organization, LE&RN, misdiagnosis is common. Patients or even their treating oncologists or physicians may not know they are suffering from a disease.

A curative treatment for lymphedema is not known. Depending on the case, the symptoms of LE can be alleviated by physiotherapy or massage. Many patients who have lymphedema of the arm wear a compression garment. These kinds of treatments do not repair injuries of the lymphatic system, which cause the disease. Surgical procedures such as lymph node transplantation, lymphaticovenous anastomosis, and lymphaticolymphatic bypass are also used.

Thanks to the following link: https://herantis.com/pipeline/#lymfactinsupsup